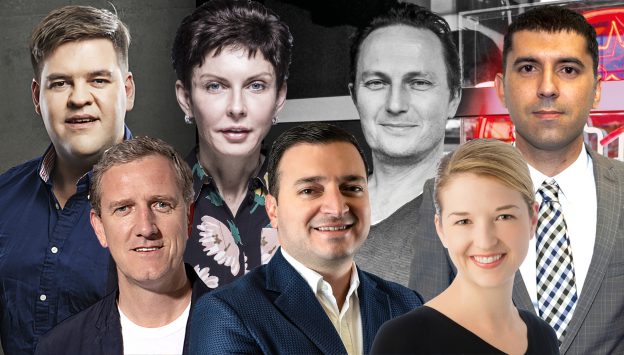 Some people would appear in the Hot 50 every year if we allowed it. They are the eternal Hot 50 and there are only seven of them.

Gaming Intelligence keeps the Hot 50 fresh and exciting by its unwritten rule that nobody can appear in the Hot 50 two years in a row – unless there are inarguable reasons why that person is so hot they cannot be excluded.

There are a lot of industry magazines that print lists of the most influential people in their industry – and they do not change from one year to the next. They tend to be a bit boring. Furthermore, the big cheeses that fill out these lists probably don’t care if they are in it or not.

A change of job or company is the most likely reason for getting in the Hot 50 two years in a row. Robin Chhabra sneaked in again this year after leaving his role as CEO of FOX Bet and joining up with Matt Davey at Tekkorp.

Segev could easily have been in it again after being promoted from COO to CEO to replace Kenny Alexander, and is the first name on our list of those who could be included every year.

However, the judges of the 2021 Hot 50 could not quite bring themselves to include someone for a fifth time, no matter how hot. Sorry Shay. Maybe next year. (Ashkenazi was also unlucky that his new job was announced after the Hot 50 was finalised.)

Both Fenton and Tjärnstrom have good claims to be included on this list of immortals. Fenton sneaks on as Gamesys looks unstoppable right now. Tjärnstrom does not because of a slight hiccup last year.

Kindred, however, is a remarkably tightly run ship. Tjärnstrom can consider himself unlucky. As can Gustaf Hagman of LeoVegas, which has enjoyed an almost inexorable climb during its short history, but the ‘almost’ just precludes eternal hotness.

bet365 chief executive Denise Coates would be in the Hot 50 every year, such is her incredible consistency. However, the notoriously shy Coates would almost certainly shun the limelight the Hot 50 throws on her. Another reason for leaving her out – we want people to be happy to make the Hot 50!

Alexander and Corcoran might have seemed eternal once upon a time, but there is quite the churn among the big company CEOs. While GVC’s rise and rise seems unstoppable, it will have a slower year at some point – probably when the UK government passes the next Gambling Act.

Speaking of which, the Gambling Commission chief executive Neil McArthur is making a bold push to become the most influential man in the sector by pushing forward numerous changes aimed at making the industry more responsible. But such is the Commission’s unpopularity right now with its constant changes that we have no desire to garner similar unpopularity by anointing him an eternal hottie.

In Latin America, Jose Duarte has established BetCris as the biggest operator in the region. While one would not know if his private company has a bad year, he is pretty much looking at consistent growth for the next decade at least.

Among suppliers, there is an obvious name missing from this year’s Hot 50. Big Time Gaming CEO Nik Robinson is a force of nature. Many call him a genius and he is certainly the most innovative person working in slots development. Robinson would make the Hot 50 every year, but where would be the fun in that?

In the US, Anna Sainsbury has created what could be the most dominant supplier in any sphere. GeoComply is almost unchallenged as the geolocational technology supplier of choice. In making state-by-state gambling feasible, it has had a massive impact on the industry. Now she has established a non-profit organisation, Conscious Gaming, to launch PlayPause, a responsible gambling tool powered by Geo-Comply. Now, that is innovative! A non-profit organisation? In this industry?

Playtech’s Mor Weizer is regrettably robbed of a place in the eternal Hot 50. Which seems incredibly harsh for someone who has endured for so long and who has built such a dominant company. However, the company’s exposure to Asia and the current retail crisis have meant some fairly major wobbles.

There are some incredibly influential founding shareholders who have never made the Hot 50 despite being more influential than just about anyone in it. Teddy Sagi’s influence shines on at Skywind and probably a fair few other companies we don’t know about. While the influence of Microgaming founder Martin Moshal spreads through US supplier Digital Gaming Corp, operator Betway and a whole stable of studios, financed by his Velo Partners investment house. Strictly speaking, neither works for an iGaming company, so we will discount them on that basis. They also disqualify themselves via the shunning the limelight clause a la Ms Coates.

Similarly, Tom Hall could win a place every year, and similarly is more of an investor and strategic adviser these days than someone who works day-to-day in an iGaming company.

That same disqualifier could be used on Tim Heath, now that the Coin Gaming co-founder has stepped away from the chief executive’s office to focus on his Yolo Investments fund. But we reckon he remains a fairly hands-on board member. He can rightfully claim to have transformed the industry with his bitcoin casino and sportsbook, and he should be looking at unfettered growth for a good few years yet. So, he’s in.

And that is it. The magnificent seven of inspirational iGaming leaders who could (probably) get in the Hot 50 every year. Respect to all of them.